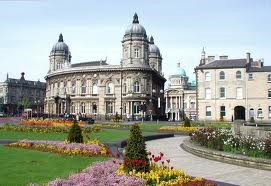 Queen’s Gardens in Kingston Upon Hull

Kingston upon Hull is located in the East Riding of Yorkshire on the River Hull.  A city break brings something for everyone, with Hull as it is commonly referred to, steeped in history.  With cobbled streets and fine examples of architecture throughout the Old Town, visitors can also explore Hull’s rich heritage with a visit to the Museum Quarter. With the Marina, beautiful parklands and stately homes also featuring on the attractions list, a great way to see Hull is by following the Seven Seas Fish Trail.  With trail maps available from the Tourist Information Centre and suitable for all ages, the trail ensures you uncover the many treasures Hull has to offer.

Kingston upon Hull
Founded by the Meaux Abbey Monks due to its prime location, a quay was built at Hull to allow for the export of wool by Monks and it was originally named Wyke on Hull.  1299 would see the area renamed by King Edward I, to Kingstown upon Hull following the granting of the Royal Charter, with the port quickly becoming a hub of trading activity for various industries including fishing and whaling, textiles, wine and military supplies.  With links to Scandinavia, Northern Europe as well as Portugal and Spain, developments in steam powered vessels would also see South America, New Zealand and Australia trade through the port of Hull.

Hull became a key site during the English Civil War, having built up an arsenal of military equipment which was located there.  The Siege of Hull took place on 10 July 1642, and was the first significant battle of the civil war, with Charles I famously being denied access to the city by Sir John Hotham, an action which would result in the significant move to full scale war.

Hull continued to develop and the port received and processed thousands of emigrants from Europe who were travelling to North America in search of a new life.  Hull was awarded city status in 1897, however, during the Second World War it would be the target of extensive bombing, second only to London in terms of the damage it sustained, with 95% of its housing destroyed in the German raids.

Thankfully, many buildings did survive the war, and today Hull offers the best of both worlds with modern structures sitting alongside the splendid architecture of the past.  Having been extensively redeveloped in more recent years, Hull is a lively and culturally diverse city, which attracts thousands of visitors.  2013 saw Hull reach the shortlist for UK City of Culture 2017, with the result due to be announced on 20th November this year.

Popular Culture
Kingston upon Hull is an historic and cultural city, and has also been a focus in popular culture.

Films & TV
Clockwise (1986) – This comedy film starring John Cleese as a School Headmaster, was shot on location in Kingston upon Hull, and features Hull’s Paragon Railway Station and Cottingham Road.

The Reunion – Craig Briggs and Ian Burnett created and starred in this comedy drama, which took 18 months to film and was shot completely in Hull, and funded by Briggs and Burnett.

Books
David Mark, who has lived in Hull for a number of years features Hull as the setting in both of his crime thrillers entitled Original Skin and Dark Winter, with DS McAvoy the focus in these gripping novels.

Broken Dreams, The Crooked Beat and The Late Greats – another crime thrilling series of novels are set in Hull, with Private Investigator Joe Geraghty being the main character.  Nick Quantrill, the author, was born and still lives in Hull.

The Harbour Girl – written by the award winning Valerie Wood, is a one of a number of historical romance novels which is set in Hull.

Famous Faces
William Wilberforce – was born in Kingston upon Hull on 24th August 1759, Wilberforce was a philanthropist and politician who was known for his leadership in the movement for the abolishment of slavery, having led the campaign for 26 years which finally resulted in the Slave Trade Act 1807.

Amy Johnson – the famous Aviator, who amongst her many record breaking achievements flew solo from England to Australia, being the first woman to do so. Johnson was born in Kingston upon Hull on 1st July 1903.

Dorothy Mackaill – born in Hull on 4th March 1903, Mackaill was an Actress whose many appearances included both silent films and later talkies.  Taking the leading lady role in films such as The Man Who Came Back turned Mackaill into a star of Hollywood, and her career continued to bring success with Mackaill starring alongside Humphrey Bogart in Love Affair in 1932. 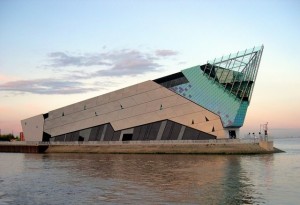 The Deep
This remarkable structure was designed by Sir Terry Farrell and opened in 2002, and is recognised as the only Submarium in the world. The Deep’s collections feature over 6,500 creatures from the ocean, with a chance to get up close with all of them including with sharks and rays.  Located a short walk from the city centre, the Deep will provide an incredible insight into ocean life, and is a great attraction for the whole family to enjoy.

The Arctic Corsair
A converted sea trawler, this museum ship forms part of Hull’s Museum Quarter.  This unique exhibit allows the opportunity to explore the deep sea fishing industry which Hull is famous for, with free admission and volunteers on board to answer questions and provide guided tours.

Hull & East Riding Museum
Located in the High Street, admission is free to the Hull & East Riding Museum, which is recognised as housing some of the finest archaeology and natural history displays in the country, with locally discovered dinosaur bones and medieval treasures, exploring the lives of Hull’s earliest residents will prove a fascinating experience.